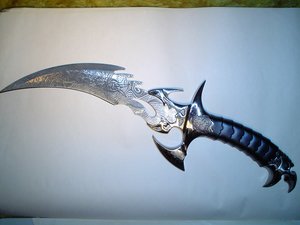 Korm is a talking dagger gifted with immense magical power. Korm gains strength through decapitating people and animals, stealing a little bit of their soul’s energy as it leaves their bodies. Becoming stronger is Korm’s main desire, but the blade is often distracted by its other pursuits of causing chaos, making  cruel jokes, and self preservation. Korm can control the minds of most people who pick him up, but certain limitations prevent him from going on an endless decapitation spree. Any string of headless murder victims would lead back to the dagger, there are people strong enough to resist his control, and powerful as he is, Korm’s metal form is immobile on its own and would still melt in any common forge fire.

Korm was made for a half-Orc thief named Gul. Gul was a successful thief, but due to his half-Orc features he often found that his only friends were ones he bought. Accepting this as a part of his life, Gul decided to buy a friend who shared a similar life philosophy to his own. He paid for Korm to be constructed, an intelligent dagger with a knack for inappropriate jokes and cutting off heads.

The wizard, Faleernwath, who made Korm didn’t initially notice any malevolence in the weapon. He gave it to Gul, knowing it might be used for evil, but aren’t all weapons? When Gul returned several months later, Faleernwath spoke with the dagger and found that it had started to take on a few of Gul’s personality traits. The Elven wizard suspected that the dagger was stealing a bit of Gul’s soul. Gul also told Faleernwath that the dagger seemed to grow stronger when it cut off the head of a living being. Faleernwath was amazed that he had created something he dubbed, “a soulseether.” He wished to study Korm, but Gul took the dagger with him to the cave of Joker the dragon to steal from the dragon’s hoard. Gul never made it out, he was burned and eaten by the dragon.

Joker was slain in turn by Amalgami, Terroc, and their adventuring allies when they freed the village of Harbinston from the dragon’s tyranny. Amalgami took Korm as his chosen weapon. The blade’s sense of humor earned him a place at Amalgami’s side. Korm remained with Amalgami throughout the First Alliance War as the young prodigy went from worshipping Apollo, to promising his fealty to the Dahak, and finally to Eris. Korm thrived as Amalgami devoted his life to Eris. The dagger was used to execute many nobles in the Persian Empire in an attempt to destabliize the country. Unfortunately for the dagger, when Amalgami moved to Greece, Korm was put away for a time.

Korm returned to use once Amalgami had been found by his son, Amalganus, and his grandson, Amalius. Amalganus was slain and Amalgami took it upon himself to raise Amalius as a sort of successor to his chaotic legacy. Amalgami still had many obligations and schemes throughout Greece. When he was away from home, Korm watched over Amalius. The little dagger loved to torture his charge. It played mental games on him and took advantage of the teenage boy’s inability to resist his mental domination. Punishments for the smallest slight included forcing Amalius to hold his own hand over a fire or to cut into his arms with Korm.

Amalius eventually escaped this torment, but Korm returned to him in time. Amalgami gave the dagger to Amalius’s cohort, Aldarian, who in turn gave it to Amalius. Despising everything that the dagger is, Amalius ignored it for a time. The dagger took control of his mind for an hour at one point but foolishly returned control to Amalius. The psion has since kept Korm locked in a Glove of Storing where no time passes for the dagger. It is only brought out for brief moments when Amalius needs it and is then swiftly returned to its prison. Korm is only kept around so that when the time comes, it can lead Amalius to his evil grandfather and kill him.