When searching for Dungeons and Dragons character images sometimes I find something that has the right feel, but ultimately looks nothing like the character. Darudanano is a dragovinian who wears extended brass claws and has a floating shield that follows him around. He is not a human with a curved blade. But the image still felt right to me and I have used it to represent Darudanano ever since. 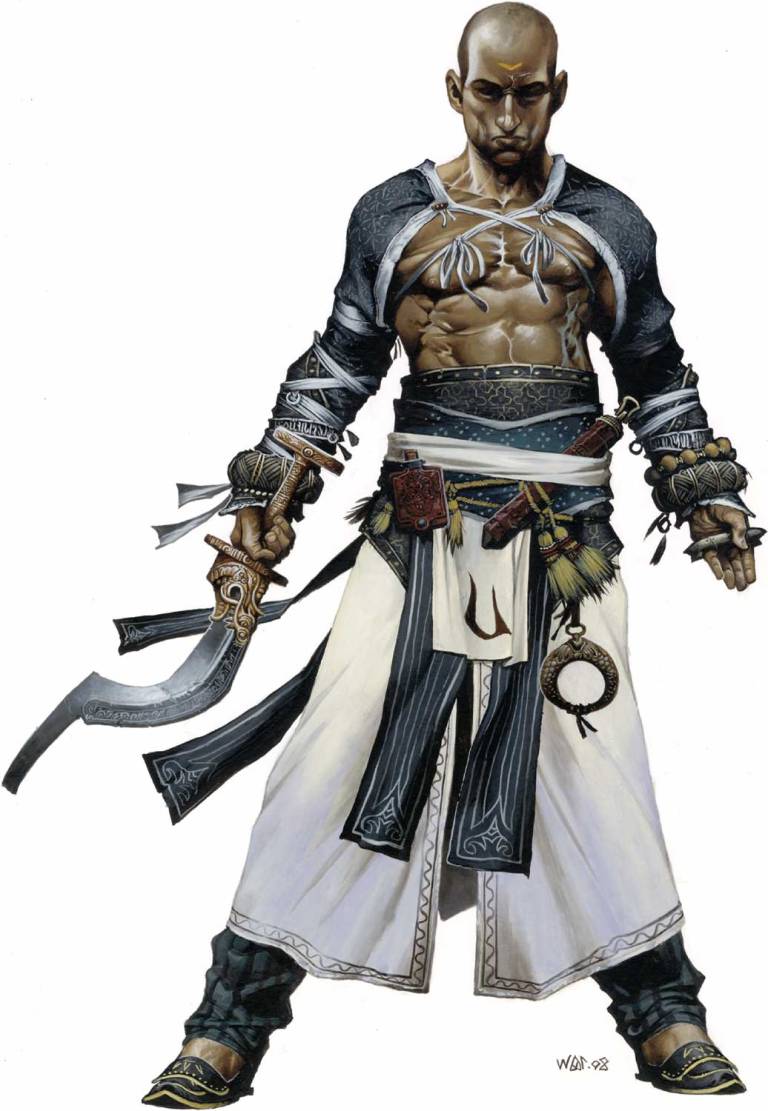 The elder brother of Tagenadi, Darudanano entered the military at a young age. Tagenadi often looked up to this older brother and dreamed of joining up after him. Daru spoke against Tagu’s joining, but his little brother did anyways. Tagenadi turned a blind eye to the war crimes of the Xorians while Darudanano saw theses acts as… necessary. Daru’s best friend, Devanane, absolutely reveled in his ability to rape and pillage the women and homes of those the Xorian army defeated.

With the success of their families, soon Daru and Devanane were slated to be fragovinianized. Tagenadi supported it, but Daru was reluctant. After the process, Daru and Deva came home changed. They were excessively cruel to the non-dragovinians in Daru’s family. Tagenadi realized his error and arranged for his parents and sister, Tanarenena, to be taken out of the country. Unfortunately the plan failed. Tagu and his parents were captured. Daru and Deva smirked at Tagu’s weakness as he was taken off to his sentencing.

Since his separation from his family, Daru has risen swiftly through the ranks of the enforcers. He now commands a seat in the King’s own combat group. Darudanano’s fighting style allows him to protect King Jevaninada II from nearly all attacks, either taking the blows himself or even turning strikes back against a foe. On the offensive, Daru uses a set of brass talons to strengthen his own dragovinian claws. He attacks with speed and power, draining his enemy’s energy with every successful blow.

4 - Rikh and Skyf - Setting the Stage, Campaigns for D&D and Other RPGs

Rikh talks about his campaign world of Skyf. Skyf is a megastructure called an Alderson disk built around a star. On the top side dwell thousands of races rescued from planets across the galaxy. The bottom side is inhabited by dragons, drawn to Skyf's magical energy. The Majisters oversee the world giving divine gifts to the pure while the impure develop sorcerous powers.You can read more about Skyf here: https://rikhhart.com/skyfRikh is also a DM on the Dungeons and Dragons Podcast UK which you can check out here: https://thedungeonsanddragonspodcastteamuk.wordpress.com/listen-now/His campaign should be starting soon after this episode is released, so stay tuned! Hosted on Acast. See acast.com/privacy for more information.