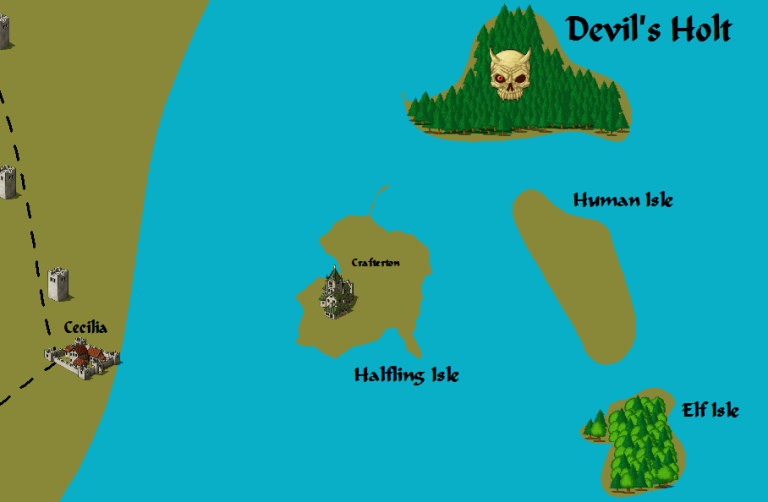 Crafterton is town with a population of about 60,000 people, most of whom are halflings. The town’s economy is based around factories powered by the strong wind blowing to the west towards Cecilia. The factories were once powered by wood fires, but the island’s forest has been severely depleted. Cutting wood is now only allowed during winter and even then only by government permit. Some of the more entrepreneurial halflings import wood from the lumber port of Makotako, but most are content to do without.

The ban on woodcutting leads to many of Crafterton’s dishes being uncooked, heavily spiced, and/or soaked in acidic juices. All the newer buildings and furniture in the city are made from stone imported from Bradel Fields. Any of the city’s surplus tax revenue instead of being saved is spent on a restoration project. The City’s Commercial Council (CCC) once worked in line with the thief’s guild of Balin’s Holt to discover many new secrets that can help Crafterton’s factories and forests. This cooperation stopped after the Xorian occupation.

Crafterton’s factories do not use an assembly line, but put a bunch of people in the same space using the same large power machine to make many products at the same time. The power comes from windmills on top of the factories and from imported fuel for the bigger factories that use fires. When no wind blows laborers are hired to turn a large crank that keeps the machine going.

The factories produce everything. One of the more famous ones, Lindertur’s factory, makes houses and then exports them. The exportation of the larger commodities requires help from golems made in Havdrast’s factory. The fault in this whole system is that Crafterton has almost no natural resources beyond fish and good soil that is only being used for personal gardens. Everything has to be imported or magically created.

Due to the large demand for transportation many magical schools have opened in Crafterton about those disciplines. Most wizards in the city are conjurers. Bags of holding, portable holes, and Heward’s Handy Haversacks are all produced in Heward’s factory. The Wayfarer’s Union, providing teleportation services, is also located in Crafterton.

Something even more preternatural than the rest of the city is the Factory of Ideals. It produces potions that twist people’s thoughts to a different prospective. The Factory of Ideals produces potions that make people fall in love, do evil things, do good things, and even release bodily waste in public. The factory is allowed to keep working for unknown reasons by the government. Most people assume bribery.

The CCC is a guild comprised of all the factory owners in Crafterton. They decide the amount people are taxed and where that money goes. They are in effect an aristocracy without representation. They are all very rich and have no obligation to the poor of the city. Prior to the Xorian occupation the public accepted this arrangement. Whenever the public was upset they would strike and start building up farms to live off of. The strike negotiations started quickly and the problems are always quickly resolved. This feeling of goodwill has changed since the Xorian occupation.

Crafterton was occupied by the Xorians in 437 BCE. A military governor, Commander Borgawitas, oversees the CCC now, preventing any possible seditious activity. Many of the factory owners have become dragovinians and enjoy the benefits of integration into a larger empire. The common folk of Crafterton have easier access to goods with the removal of import tariffs, but their civil liberties have been seriously limited. Many of the halflings have been forced to work on the restoration project without pay.

The hurricane floods of 401 BCE destroyed many of the smaller buildings of Crafterton and without the wind break of large trees, almost all the efforts of the restoration project were undone in one night. The CCC was quick to rebuild the factories, but the rest of the city has been left to languish. Efforts to strike are no longer met with concessions and negotiations, but whips and executions. Dragovinian animals are everywhere, watching the captive populace to prevent insurrection.