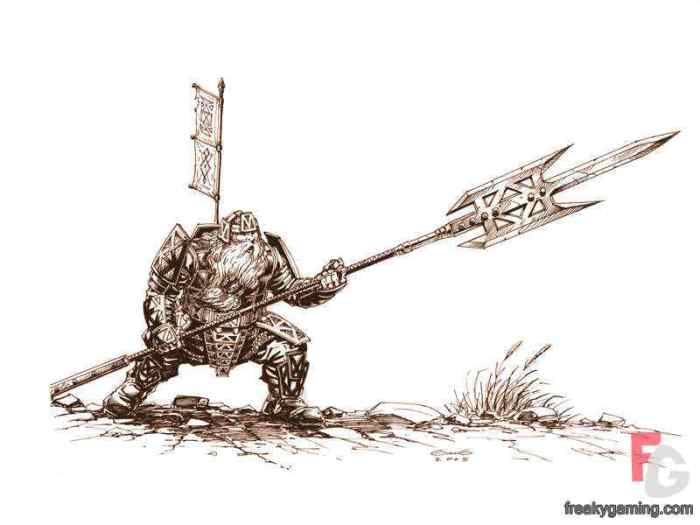 Torin Stoneblade is a powerful high priest of Athena, advisor to the Hill Dwarf King Dainlin, and second-in-line to the Hill Dwarf throne. Torin’s accomplishments as an Alliance Council member made him one of the most well-known clerics in Eastern Cimmeria. Using his divinely gifted magic Torin slowed the Xorian advance inspiring hundreds, if not thousands, to join the Alliance and fight alongside him. Torin is also a skilled general whom many respect and fear.

Torin was born to Ringr and Oaru making him the great nephew of Dainlin, King of the Hill Dwarves. His royal blood through his mother promised Torin a life of ease, but also of responsibility. As a youth Torin was drawn to religious ceremonies, committing what he saw to memory and reperforming the rites the day after a religious celebration. When the time came for Torin’s apprenticeship, he pleaded with his father to be sent to the clergy of Athena so that he could serve the king as a priest and as a tactical advisor. Ringr assented and Torin began his training to be a priest of Athena.

Tragedy struck soon after Torin’s apprenticeship started. Ringr managed the mithral mine known as the Flower of the Deep northeast of Jord. Drow attacked the mine, driving the Dwarves out and killing Ringr. Ringr’s best friend, Lasrar, stepped in to help raise Torin and his brother Ririh. Torin learned much from Lasrar and continues to see him as a father figure to this day.

Torin threw himself into his studies. After coming of age he quickly rose through the ranks of the temple due to his command over Athena’s magical gifts, his knowledge of her rhetoric, and his connection to the king. He became an advisor to his great uncle, King Dainlin, giving him advice on both spiritual and military matters. It was under Torin’s guidance and leadership that the Flower of the Deep was reclaimed for the Dwarves. Torin took the sword of the Drow leader and laid it upon his father’s tomb.

When the time came for Jord to send a representative to the Second Alliance, Torin was chosen along with his uncle Dralin. The Dragovinians slew Dralin during the Battle of Phoenix, but Torin once again avenged his fallen family member by killing three high ranking Dragovinians  during the day’s fighting. The death of Dralin put Torin second in line to the Hill Dwarf throne behind Dainlin’s own son, Tibern.

During his tenure as an Alliance member Torin undertook many dangerous missions. He recovered some of the necessary components for the construction of the ring gates. He found the Tome of Agamemnon which contains rituals for improving the soldiery of the Alliance. He found the sword of Kruk-Ma-Kali before it was stolen by the traitor, Terroc.

When Amalius and Tagenadi left the Alliance, Torin joined them at first. During his absence from the Alliance he helped eradicate threats to Mars’ Oasis in the Shacklack Desert. Torin had a change of heart after Amalius chose to destroy the Red Orb of Dragonkind to free the eldest red dragons rather than use it against the Xorians. Torin apologized to the Alliance, feeling that they were right to expel Amalius and Tagenadi from their ranks. He has reassumed his position as Dainlin’s advisor and serves as a general in High King Torngar’s army.

Amalius and Tagenadi still viewed Torin as a friend for some time, occasionally visiting him to ask for his advice or for a favor. Torin wished these visits to stop as they put him in a uncomfortable position with the Alliance. Recent events forced the Alliance to attempt capture of Amalius and Tagenadi. During this battle, Amalius dominated Torin’s mind, forcing him to bow before the psion. It is unlikely that their relationship can be repaired after this.