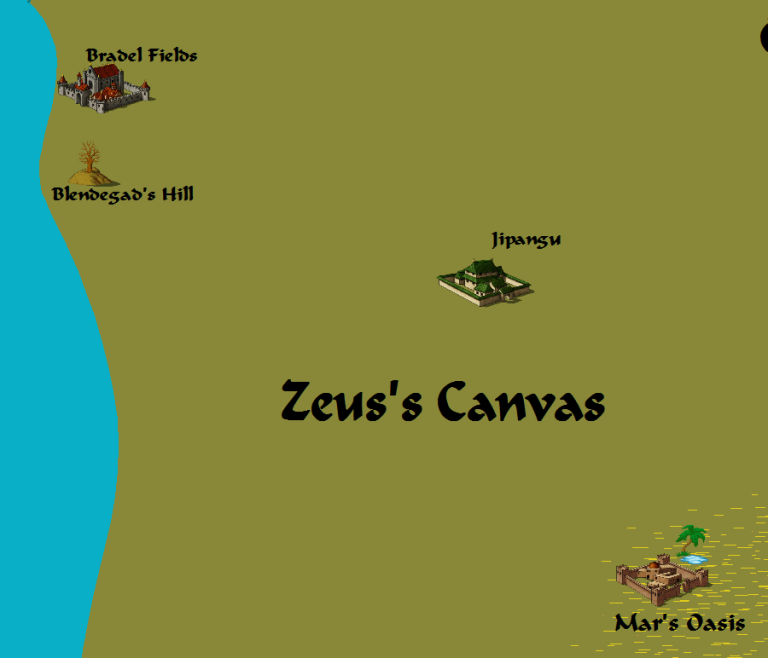 Jipangu is a large city of 110,000 people in the middle of Zeus’s Canvas. Most of the people in the city have some relation to one noble family or another even if they are several hundred steps away from being leader of their family. All this nobility confuses outsiders, but for those who grow up with it, the whole hierarchy makes perfect sense. In fact, the natives find societies without this level of nobility difficult to understand.

Jipangu is built on Zeus’s Canvas, a place in which great storms rage year round. The city is atop a large, dirt-covered, rock plateau. The constant deluges do not have disastrous effects for the citizens when they are inside the city. Irrigation canals reroute the large amount of rain from the plateau into the rice patty fields that feed the large population of Jipangu. An ancient orchard also exists close to the city. It has many different types of fruit that are eaten by the Jipanguese and the birds that flock around it. Sounders of pigs are kept around the city for the disposal of waste and to provide fresh meat for the citizens.

Honor is very important to the Jipanguese. The slightest offense or indignity is settled with a duel or immediate compensation; thus, there are many duel shrines in every section of the city. These places look like large square gazebos with benches on the outside for spectators to watch the duels if they wish. Within the shrine a weapons bracket holds a variety of wooden weapons. Most duels are decided by the first hit landed with a wooden weapon. Serious offenses will proceed until one combatant is rendered unconscious. Only in extremely dire circumstances are duels to the death. Duels to the death are scheduled in advance to allow both sides to make arrangements should they die. Such duels attract large crowds.

Because of all these duels the average citizen in Jipangu can act to carry out his own justice. The high sense of honor prevents most of the citizenry from abusing their skills. Jipangu has neither police force nor the need for it because of all the trained swordsmen. Secret crimes, like burglary, are still committed in Jipangu. Such crimes are investigated by the government detective agency, Tarot De’Longshare. The army handles riots and revolts when they do occur. The system works well and crime in the city is swiftly punished.

Jipangu has a militaristic culture. A strong man is respected and gains honor with every fight he wins. Weak men lose their political power without repeated reinforcement from their other traits. The high value on physical strength makes surrender an unacceptable and cowardly option. The Jipanguese army does not retreat from battle. Politicians do not change their positions when the situation changes. This adamancy in one’s decisions once they are made means very few things are said with uncertainty in Jipangu. An unofficial law has sprung up that if one breaks their word, they will be exiled.

Jipangu has a traditional style of clothes that is worn at all times by people in the city-state. Anyone not doing so is socially ridiculed and outcast. The traditional garb is a long, colored vest worn over a white shirt. The color of the vest indicates the wearer’s honor and position in the hierarchy of Jipangu. A headband is also worn that signifies special achievements by the symbols upon it. The pants of the outfit are extremely baggy below the knee, but no other special significance is applied to them. Silk is of course better than cotton or wool. Pants are worn by both sexes except at special ceremonies. There are no special shoes worn with the outfit. Armor is not worn within the city except by soldiers.

The official Jipanguese army of 7,000 is one of the best equipped and trained in Cimmeria, but it lacks unity. The soldiers fight for themselves and their own honor. Tactics are often simply choosing where the troops will charge from. The army does contain infantry, cavalry, archery, clerical, and magical units. Each unit has its general and each general has his centurions. They meet before each battle to discuss where they will fight, but since honor is obtained through killing with your own sword, instead of the overall victory, they will work on their on.

Jipangu has a First Family that rules over the whole city and decides disputes between the other families. The most honorable family holds this position and only loses it in a challenge by another family or through a major dishonorable event for the First Family. In the case of a dishonored First Family a council of all the families is called to decide which of them will take the place of the First Family in the new order.

The art of the city is some of the best in the world and it is present throughout the whole city. Almost every object, piece of furniture, and wall is decorated in some way. Vines, flowers, and all things natural and beautiful are usually the subject of art. If Jipanguese art was a representation of the real world then there would be no people, actions, or conflict in it. These things are always absent from the walls, paintings, and sculptures of Jipangu. Their focus is on still-life pictures.

Jipangu joined the Second Alliance against Xoria. Arendil, the current head of the First Family, leads the Alliance as well. Jipangu is currently hosting thousands of refugees that escaped from Phoenix when the city was conquered by the Xorians. The influx of people puts a strain on Jipangu’s resources, but imports from the rest of the Alliance have alleviated some of that burden.

The refugees of Phoenix along with many people from Dalleer, Dorrowsan, and Shalerton have all gathered outside of Jipangu for military training. Gradorian and Junai, the previous leaders of the Mercenaries Guild of Phoenix, are in charge of this vast training program. Kig Yupington assists the two generals as he can with the Dorrowsan Scepter. The training is further accelerated by rituals read from the Tome of Agamemnon. These rituals purify water teleported to the city from the Geyser of Talos. Any who drink this water are transformed into a terrifying warrior for a day. This transformation allows the trainees at Jipangu to learn techniques and strategies that would normally be beyond their abilities.