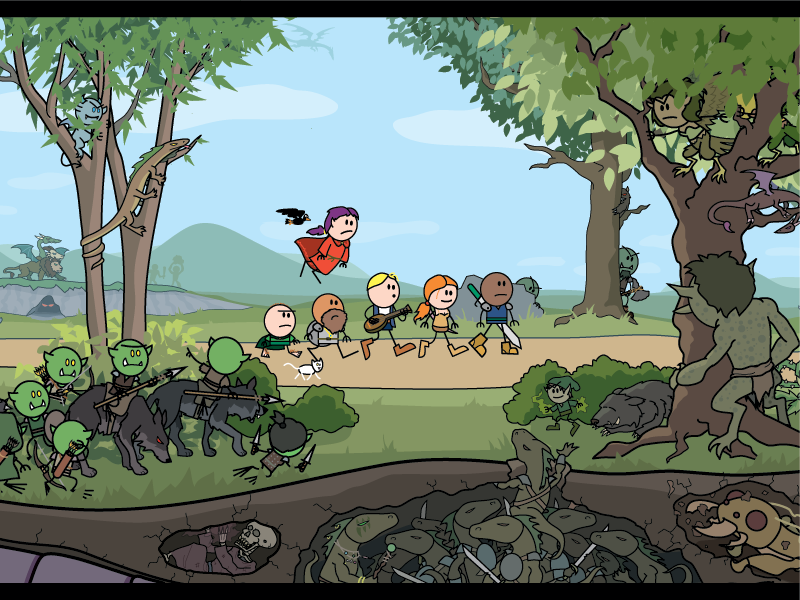 I read a few webcomics and one of my favorites is called Order of the Stick.

There are different genres of webcomics just like any other medium.

My favorite genre combination happen to be humorous comics about video games or D&D written by physicists or computer scientists.

Anyways, Order of the Stick fits pretty well into that genre.

Order of the Stick is drawn and written by Rich Burlew, a game designer who now does the comic full time.

The comic is about a band of adventurers named the Order of the Stick fighting the evil lich, Xykon.

As you can see the comic is drawn in a fairly simple style which is occasionally lampooned by the characters themselves. For example, Roy’s feet are different sizes and there is a comic where he talks about how his big shoe goes on his left foot.

Speaking of Roy, the main characters of Order of the Stick!

Roy is the black guy on the far right of the picture above. He is the leader of the Order of the Stick, an intelligent and principled fighter who fights Xykon due to an oath sworn by his father.

Next is Haley, a rogue with a complicated past. She joined the Order of the Stick to earn money to pay her father’s ransom. She’s stayed on due to the good work the group does and because she’s started dating the next person in line.

Elan is the blond guy playing the musical instrument. He is hyper aware of storytelling tropes. He also has an evil twin, a good mother, and an evil father. Elan is a bit dumb when it comes to anything that isn’t a storytelling device, but he has a pure heart.

Durkon is the short bearded guy. He’s a dwarven cleric. He looks out for everyone else in the party. He has a strong sense of honor and is always ready and willing to do the right thing.

The short bald guy behind Durkon is Belkar. He’s an evil halfling psychopath. His journey with the party is basically a form of community service for murders he’s committed in the past. You’d think this is weird, but its a fairly common gimmick used in D&D. The cat walking next to the party belongs to Belkar and is named Mr. Scruffy.

Flying above the party is Vaarsuvius, an elven wizard. Vaarsuvius is arrogant and uses magical power to cruelly avenge the slightest insult. Vaarsuvius’ gender is never revealed in the comic and is joked about on a few occasions.

Xykon is close to achieving his goal of using an ancient evil to rule the world, but the Order of the Stick is ready to stop him. Of more concern is Xykon’s assistant, Redcloak, who is planning on double crossing Xykon at any moment.

That’s enough on one comic for now!