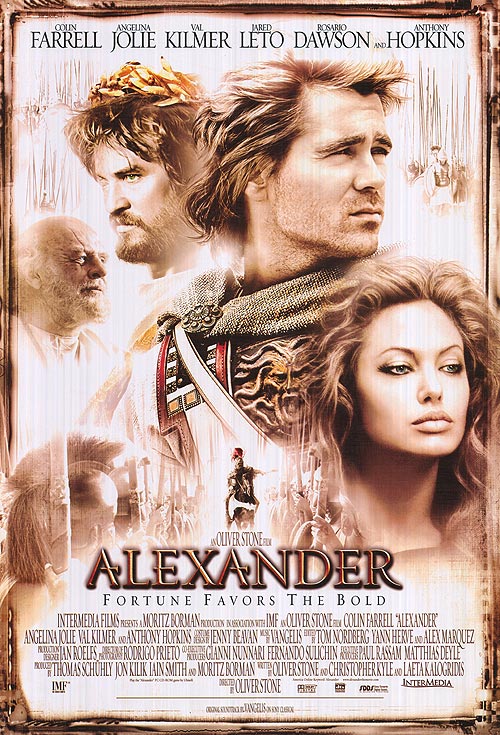 I’ve been writing a paper on Alexander the Great over the past two years. The paper compares the ancient sources on Alexander’s life with modern media such as the movie above.

For those of you who aren’t familiar with Alexander, he was a Macedonian King that conquered most of the world known to western and near eastern civilizations at that time.

Macedonia is one of the hilly nations north of Greece. The Macedonians had a culture similar to that of Greece. I’d rather not get too deep into the debate about whether Macedonians are ethnically Greeks or not. The debate actually decides some of the territory lines between Macedonia and Greece. I think its safe to say that the ancient Greeks thought of Macedonians as uncivilized rude Greeks. A bit like how Democrats see Republicans and vice versa.

Macedonians were famous for drinking a lot more than the Greeks. Alexander the Great shared this alcoholic problem. The ancient histories about him contain many episodes in which he gets outrageously drunk. He even kills one of his best friends during one of his binges.

There’s also a lot of speculation about whether Alexander was a homosexual or not. This speculation is sparked by Alexander’s close friendship with another man named Hephaestion. The relationship was likely not sexual. Greeks did condone male-to-male sexual relationships, but only if they were pedophilic. The older man was seen as teaching the younger one. When the younger became an adult, the loving relationship transitioned into a lifelong friendship.

Alexander did have homosexual relationships with other men. Additionally, he was married to three women. This sort of pansexuality was typical of a Macedonian king of the time.

The reason I bring all this sexuality stuff up is that Alexander is often dropped as an example of an ancient gay man. For example, one debater says, “There’s no historical tradition of gay marriage. We don’t know what that would do to our society.”

Then another person says, “But the ancient Greeks had homosexual relationships! Look at Alexander the Great and his lover Hephaestion!”

Just a little nerdy historian bit from me. That’s all for this week!