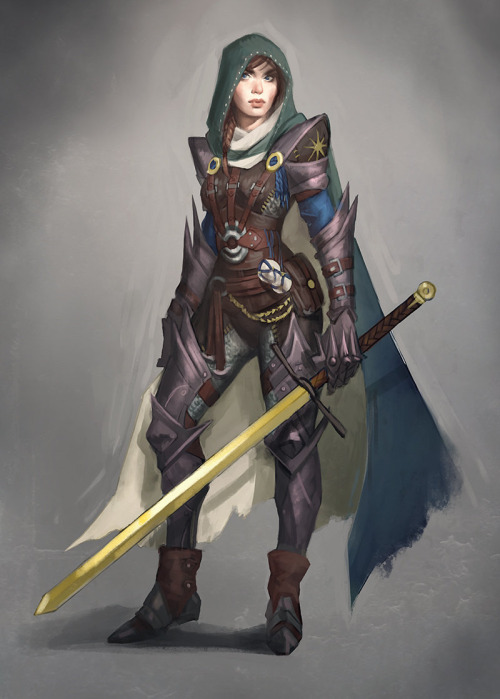 Cecilia the Salt Champion was the daughter of Zeus and the mortal Hymniara. The founder of the city that now bears her name and liberator of the Caspian, Cecilia slew the great sea beasts that prowled the sea. She accomplished many other great tasks on land as well as befriending the dolphins and the people of the sea. During the Dragon War, Cecilia imprisoned the black dragons. All her tasks were done in the name of her lord-father, Zeus, while wielding a shining sword that he gave to her. The sword was buried with her deep beneath the earth where Cecilia slumbers, awaiting the return of the black dragons.

Hymniara, Cecilia’s mother, lived in a village along the Caspian’s western shore. In those days, the Caspian was filled with sharks, stingrays, eels, and great monsters that would capsize and devour any craft that sailed upon the waters within minutes of disembarking. Because of this the villagers provided for themselves through farming, hunting, and catching fish along the shore in nets, but never venturing out into open water. Doing so was a death sentence. Even the coastlands were not entirely safe as the people living within the sea raided villages, taking people, food, and valuables. This was true of every place in Cimmeria at the beginning of the Iron Age. The sea people were no different than the goblins in the east, the kobolds in the north, or the ogres and giants of the mountains.

Hymniara was a dairy farmer’s daughter, a milk maid. Despite her lowly origins she had the form of a princess, attracting attention from affluent suitors for miles around, even before her first flowering. Hymniara’s father, Sorsimon, protected his daughter and when she reached adulthood he did not sell her off to the suitors like one of the cattle he milked. He allowed Hymniara to hunt with the women of Artemis, though he did not let her take their vows. Sorsimon feared that Hymniara’s beauty would lead her to break her vow of chastity whether willingly or not. His fears proved justified when Hmyniara caught the eye of Zeus.

Zeus came to Hymniara in the guise of a river trout tangled in the erosion-exposed roots of a tree. The young maiden freed the trout out of pity. Zeus revealed himself to her and took her. Hymniara became pregnant and told the hunters of Artemis that she must leave them. The goddess was sad to see Hymniara go as she had been one of the greatest to ever run with the hunters. Thankful for the girl’s honesty, Artemis gave Hymniara a suit of armor made from fish scales to keep her safe wherever she might go, land, river, or sea.

Hymniara never used the armor. Looking for protection from the endless stream of suitors that continued to knock on her father’s door, Hymniara married Gengi, the chieftain of her village. Soon afterwards she gave birth to Cecilia, a young girl with golden hair and strong fists. As the babe grew it became clear that she had absorbed the divinity of Zeus as well as the training of Artemis that Cecilia had undergone. Hera sent scorpions to sting the girl while she played in the fields. Not only did Cecilia slay the beasts, but she ate then as well! Stingers and all!

Cecilia became a woman as beautiful as her mother. Suitors approached her at home or in the street, but they soon learned their lesson. Cecilia challenged each suitor to a contest, hunting, wrestling, running, falconry, whatever matched her desires at the time. She wagered her marriage against the arms and armor of her potential groom. She never lost. Soon no more suitors came, fearing the financial hardship of a loss and the shame that came with it.

With her virginity and her prodigious strength Cecilia seemed a hunter of Artemis; but, like her mother before her, Cecilia never took the vows of the Huntress god. Cecilia wished a marriage, but only with a man she deemed worthy. She made a vow to her father, Zeus, to only lay with a man who could take her virginity instead of receiving it as a gift. To consecrate the vow Zeus gave her a shining golden sword. When she reached adulthood Cecilia left home to travel the world with Zeus’s golden sword and the fish scale armor Artemis had given her mother.

Cecilia spent years in the forests of Cimmeria, learning from the Elves sword skills and the basics of magic. She wrestled bears and wolves, winning every time. A clutch of basilisks wandered into the Elven region of the forest and Cecilia drove them off by beating every single basilisk in a staring contest.

When Cecilia learned everything she could from the Elves she traveled east, hugging the Caspian’s coast. Along the way Cecilia defeated many bandits and suitors. She reached the Aractrash River and saw a rakishly dressed man attempting to push a huge wooden bowl the size of a wagon into the river. Cecilia asked him his name and his business. The man replied, “Me name is Jovy. Apollo told meh to build this here bowl and put it in tha’ river. He promised a reward. Perhaps iffen you help me we can share it.” Cecilia shrugged and shoved the bowl into the water with a single push.

The bowl splashed into the jungle water and began to grow. It lengthened and tapered at the ends, forming a streamlined structure. Huge poles grew out of the bottom rising up into the sky. Wooden slats protruded from the internal sides and then joined together to make two decks. Ropes and sails appeared from nowhere to fill out the rigging of the ship. An anchor and chain grew out of a whorl on the wooden side. Lastly, the steering wheel slowly rose from the upper deck at the rear of the ship. Floating on the river before Cecilia and Jovy was the first sailing ship complete with two masts, a forward boom for a jib and almost a dozen sails. A crew of sailors stood at attention on deck, summoned by the same magic that created the ship.

“Are you to take that into sea against the monsters? asked Cecilia.

“Aye lassy, and I’ve a mind for you to come along too iffen you be willing,” said Jovy.

“An adventure on the open water? I’d like that.”

Jovy named the vessel the Mira Miro and he took his place at the steering wheel as Captain. Cecilia joined him, wearing her fish scale armor with her golden sword always at the ready. Jovy’s command set the sailors to work taking the Mira Miro downriver. Fresh water turned to salt as they reached the Caspian Sea. Almost immediately something rocked the ship. A great tentacle rose out of the depths and attempted to drag the ship down into the water. Cecilia called out her father’s name and jumped into the water with sword in hand. Her fish scale armor allowed Cecilia to swim through the water with ease and breath it as well. She sliced off the monster’s tentacle with her golden sword, then followed the beast into the deep as it retreated. She slew it and reemerged with a giant octopus eye to document her achievement. Jovy congratulated Zeus’s daughter before setting sail once more.

The heroic duo traveled across the width and breadth of the Caspian, slaying monsters as they went. Jovy helped Cecilia as he could, but the Salt Champion, as she became known as, rarely needed assistance. The young hero Amalgami sailed with Jovy and Cecilia for a few years before he obtained his divine father’s power to command electricity. He left the Mira Miro before the duo’s expedition ended. The Mira Miro continued to clear the sea’s waters of its most fearsome beasts allowing others to fish and sail in safety. Once reliable aquatic commerce was established Cecilia returned home and remade her village into the first fishing town of the Caspian. The villagers renamed the town Cecilia in honor of their great hero. The dolphins and the people of the sea were thankful for what Cecilia did as well, for the monsters had plagued them too. To this day Merfolk, Sahuagin, and the other sea races perform religious ceremonies on the shores outside of Cecilia.

Cecilia protected the village as it grew, warding off many monsters and groups of bandits. Cecilia’s village was attacked by an evil Orc warlock named Hargath at one point. Cecilia gathered a few childhood acquaintances who had grown into warriors and mages of their own right. They fought back against Hargath’s orc hordes and Cecilia slew the warlock herself. She took a trophy from the Orc’s body, an opal he had in place of an eye. Cecilia brought the opal home and presented it to Nikias, an archer who she hoped would be her husband soon.

Unbeknownst to Cecilia, Hargath still lived on within his Eye. He controlled Nikias and her other friends, sending them against Cecilia. She fought to subdue them, but nothing stopped their magically induced fury. Cecilia was forced to slay the people she had called companions and the man she wanted to call husband. She buried the Eye of Hargath in a secret place and grieved for months. When Tentineh approached her about ending the dragons’ hegemony, she saw a chance to atone and joined the other heroes of Cimmeria in the Dragon War.