I got a program called HearthstoneTracker to generate some statistics on my Hearthstone matches.

Hearthstone Tracker collects the data that I can then use to answer those questions. It even has graphs!

The program is available for free at http://hearthstonetracker.com/

It’s a small download and it runs in a separate window while you play Hearthstone. You can minimize the window or even have the program stored in the tray if taskbar space is precious to you.

The program may collect a lot of statistics but it has a few issues.

Originally the program collected stats through a screen capture system. This is fine if you always keep the game open, but I like to do other things while I play (like writing blog posts).

I created a workaround for that through a little bit of window feng shui.

The program developer has since come up with a way to grab data from the stream going on to the internet or something.

And somehow that method is even worse. I don’t know how it manages to get the length of a game wrong every single time, but it does. There’s an option to manually enter the times along with changing which class you played, which class you played against, how many turns the game took, etc. But who wants to do that manually? That’s why I got the program in the first place!

Other than that it performs fine. It detects who won and who you were playing against. Ultimately that’s all that matters.

The Tracker also has a neat feature after you finish an Arena run. You can manually enter your rewards and it keeps a running total at the bottom of the application.

I’ve tested HearthstoneTracker against other tracking applications out there, Track-o-bot and HearthStats, and I found HearthstoneTracker to be the best one. If you’re interested in something that will keep track for you, I’d definitely recommend the little program!

Continuing in the series of posts about how to beat the Heroic bosses in Hearthstone’s Naxxramas adventure, here’s Thaddius!

First, he’s got 15 more health than the Normal version.

Second, on his first turn he automatically summons his own Feugen and Stalagg.

While he may start with two immense monsters, the good news is that they can’t attack on the turn he summons them and they don’t trigger their own deathrattles.

Even better, Thaddius’ Feugen and Stalagg will trigger your own versions of those minions. So if his Feugen has died and your Stalagg dies, then Thaddius is summoned to your side of the field.

Your turn comes around again and you play Misdirection.

Thaddius goes. He plays a minion and then attacks with Feugen and Stalagg. The Misdirection triggers and you pray that the two beasties kill each other. It’s a 1/3 chance that they will.

And that’s it. The deck has a few other methods for removing Feugen and Stalagg. Then it stalls the game out with secrets until you can gain complete control with a big Unleash the Hounds combo or by playing your own Feugen and Stalagg and getting a huge Thaddius on your side.

Really once you’ve got a Thaddius on the board you’ve probably won.

The Polarity Shift also interacts strangely with buffs that the other three cards have. The buffed attack (or attack and defense for Stormwind) is switched to defense, creating a permanent gain in stats. Then the buff is applied to the attack once again. If it keeps switching then your minions keep getting more stats. Leokk from the Animal Companion spell also takes advantage of this effect.

Cards to avoid against Thaddius are ones with zero attack. The Shaman is pretty bad because his hero power will be close to useless. Flametongue Totem will have the same swapping power that Dire Wolf Alpha does, but it dies in the process.

Regardless, the Hunter deck works and isn’t too expensive to craft. Plus, secrets are always fun! 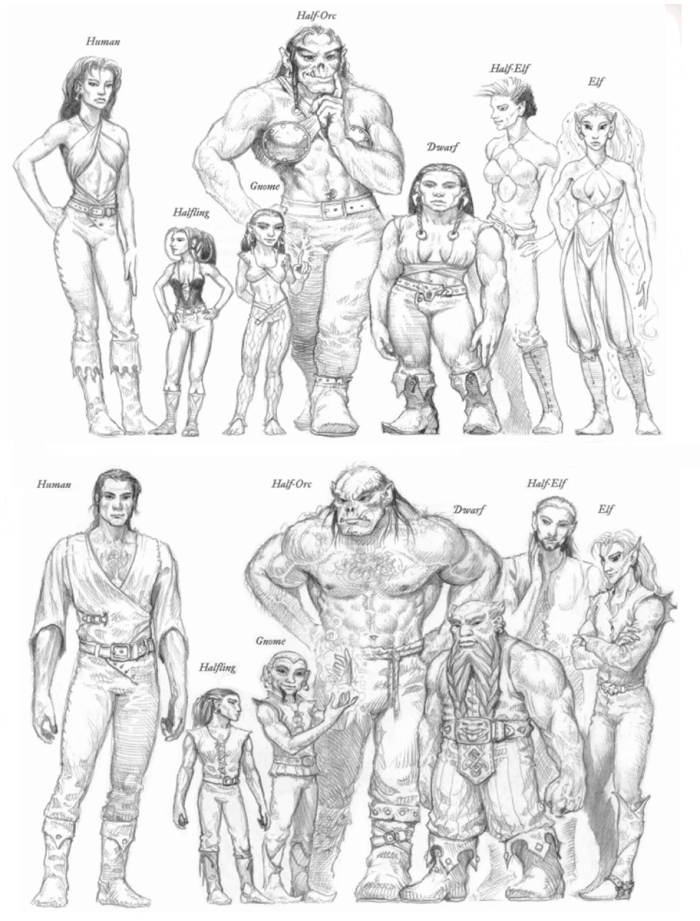 Previous: An Overview of Gurutama Part 11

I lied! There was one more Gurutama Overview of Races post left.

Dawn of Worlds has a slightly different game definition of what a fantasy race is.

In D&D a fantasy race is any genetic group similar to humans in shape, intelligence, and power (no angels or demons).

In Dawn of Worlds a fantasy race is a construct for influencing the world.

A Dawn of Worlds race doesn’t even strictly need to be people. It could be something like a combination of computer programs.

What this means is that some of the typical fantasy races in D&D were not created in our Dawn of Worlds game.

Orcs, halflings, gnomes, gnolls (dog people), etc, were not created as official races in the Dawn of Worlds game that created Gurutama.

That doesn’t mean those races don’t exist in Gurutama!

All that means is that we decided the world’s history already had enough forces influencing it with the races we had created.

So what place do the other races have in Gurutama?

It depends on which race you’re asking about.

Halflings and gnomes exist in Western Hearthland, the dwarven continent.

The halflings and gnomes are also buddies with centaurs that live in that area.

Goblins (smaller versions of hobgoblins) live all over the place, but have a large concentration within the Turashtegal Jungle.

Orcs live all over the place too.

We’ve been discussing the placement of other races within Gurutama such as gnolls and bugbears, but nothing concrete has been decided yet.

My plan is to hammer out the timeline over my next few posts on Gurutama and then get into the specifics of other parts of the fantasy world.

I just wanted to let you all know that the other races were not left out. They were just not heavy-hitters in our Dawn of Worlds baseball game.