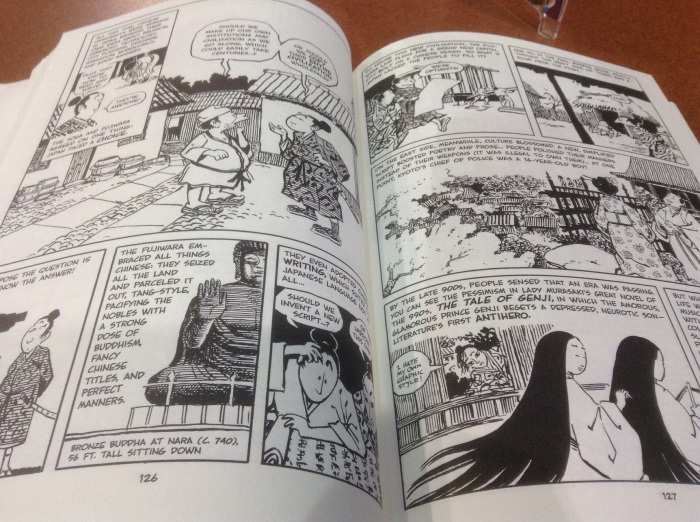 I said in a previous post that I’m reading the Cartoon History of the Universe Part 3. Here’s the page I’m on now about Japanese civilization.

The author’s name is Larry Gonick. He does a bunch of other cartoon non-fiction books as well.

All his books are funny, informative, and quick to read. You can check out more of them at his simple website, www.larrygonick.com

I started reading the series in third grade when I was homeschooled by my parents.

Only the first two books existed then. I’ve read them cover to cover dozens of times since. This repeated reading is probably why I know so much about ancient history, but a lot less about anything after the fall of Rome.

I showed the books to my father-in-law recently because he was interested in the Roman Empire and the Holy Roman Empires.

His reaction upon flipping through them was surprise at the vast amount of sex in them.

Gonick doesn’t shy away from portraying the sexual scandals in his books. If sex between two people influenced their actions and their actions affected history, then he includes the sex.

I read the books when I was eight if that matters to anyone.

Gonick also writes a comic feature for the children’s science magazine, Muse. The magazine is written for ages 10-14.

The feature is a page comic of archetypal philosophers from different cultures talking with each other.

The philosophers also fool around and crack jokes in the margins of other articles throughout the magazine.

I’m rereading the later three Cartoon History books now so that I can fill the gaps in my natural recall of different historical periods.

I’ll probably need to reread it another dozen times before my recall of anything past 500AD is perfect, but I’m hoping that I’ll get there!

I’ve been reading this book lately that suggests lighting candles to focus.

I read several books at a time. I hop between each book as I go. I once read a book over three years because I kept hopping between it and dozens of others.

Right now I’m reading The Happiness Project by Gretchen Rubin, The Cartoon History of the Universe Part 3 by Larry Gonick, and The Anabasis of Alexander by Arrian.

The last book is the most interesting of them. It’s an ancient history of Alexander the Great written around 100AD, 400 years after Alexander died.

Anabasis is the Greek word for a journey with an element of conquest/violence. The best translation I’ve come up with is incursion for this specific usage. Alexander invades Persia and continues further and further east until his troops mutiny and he is forced to retreat from India.

Anyways, those candle things. I got a few to try them out.

Can’t say it helped me focus very much. The Happiness Project recommended scented candles, and the one I’m using has only a very faint scent.

I’m not used to scented candles. My family AND my inlaws don’t use them due to allergies. The scent just makes us sneeze.

It’s a nice idea though. I think I’ll try it again sometime.

I’ll need more matches though. I’ve only got two tiny match books. With electric stoves, I’ve never light anything in my apartment until the candle thing.

If you’re interested in The Happiness Project the author, Gretchen Rubin, has a blog of her own by the same name. Check it out at www.gretchenrubin.com