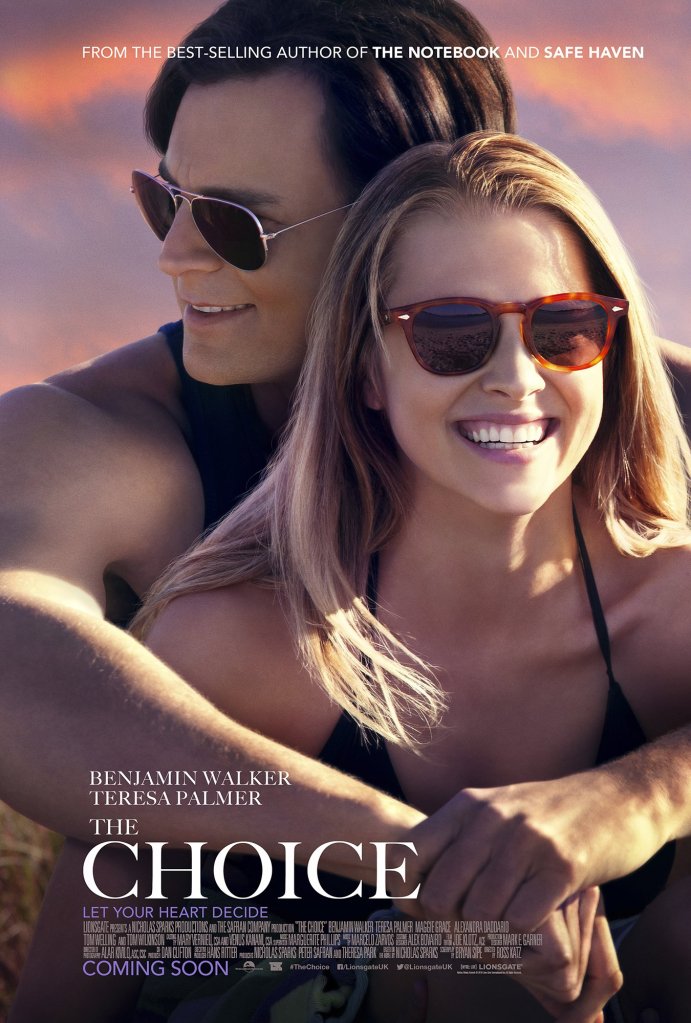 My wife picked Nicholas Spark’s latest movie adaption, The Choice, for us to see. She’d heard it was like the new Notebook which we both liked.

The Choice can best be described as two movies glued together. Let’s dive into it!

Travis, played by Ted Cruz lookalike Benjamin Walker, is a womanizing veterinarian who has a semi-steady girlfriend.

Gabby, played by Teresa “looks like a heroin addict” Palmer, is training to be a doctor and is dating one of her superiors at the hospital, Ryan.

Gabby moves next to Travis and they soon realize they are a terrible fit for each other and that Gabby will never sleep with Travis.

Of course Travis can’t have that! He slowly seduces her. They break up and get together. Yadah yadah, typical romance movie stuff.

Now normally the movie would end there, with the happy couple’s wedding.

The Choice is no ordinary movie though!

Fast forward seven years and Gabby is in a coma due to a car accident.

The movie does not spring this on you suddenly. The first scene was actually Travis entering the hospital with flowers and everything else was a flashback.

Travis has to make the titular Choice, keep Gabby alive in the hope that she will return to him and their two children or remove life support?

I won’t spoil his choice or the results/consequences. The end had many tear jerking moments and that’s all you need to know.

The second part of the movie is great and I’d definitely recommend it. As for the first part…

The first half of the movie suffered from the disease of “all these characters are jerks.”

Everyone had some sort of adolescent sexist agenda. Travis is a lady killer. Gabby distrusts all men. Travis’s sister thinks that because Travis and Gabby are opposites that they will obviously get together.

The minor characters get included in the sexist mess as well. Travis’s friends wives say, “Men have more fun if they feel like they’re getting away with something.”

Additionally, the characters have zero problems in their lives except what I already outlined.

As another review I read states, “in the Nicholas Sparks universe, everyone is beautiful and successful.”

While this let’s the audience focus on the plot it did seem odd to me. For example, Travis encounters no racism when he hangs out with his black friends in Carolina. The Confederate flag is also mysteriously absent from landscape shots of the harbor.

I think that would’ve made an interesting sideplot but I understand why it wasn’t included. The movie is about Travis and Gabby, not Travis and his friends. There might’ve even been a conscious choice to leave our racism with the notion that if racism is absent in media then it could eventually vanish in real life.

Regardless of intentions, all these elements disrupted my suspension of disbelief during the film. I kept thinking, “That doesn’t make sense, why isn’t that there?” or “Oh God, another sexist/patronizing speech.”

Adding to that, Walker looks 40 years old in The Choice while Palmer looks 20. This isn’t accidental. The characters they play are actually 10-15 years apart in age. It adds this whole other creepy element of cradle robbing to the film.

Despite all that I’d still recommend the film for its stellar second half. My gripes disappear there and I can wholeheartedly recommend the movie for a Valentine’s Day date with your significant other.