I picked up my spy partner from the previous post and we went to our San Jose friend’s house together. After catching up a little we started the gaming off with a few rounds of Three Dragon Ante.

Three Dragon Ante is a game made by Wizards of the Coast for D&D. It’s meant to be a card game that the people play in D&D worlds. It’s a bit like poker with a three card hand, but with tons of other rules and suits thrown in. Each suit has a special effect when you put it into your flight (the hands are called flights because they cards are all dragons). The special effect only activates if your card is weaker than the one your opponent played previously. The person with the highest hand at the end of the round wins the pot. You can see that you have to balance between activating your effects or playing high cards to win the pot.

Three Dragon Ante has a nice flow to it and we played two games of it. After that we went to pick up some pizza and talked about which roleplaying system we’ll be using for my next campaign. I and a few other group member have gotten tired of playing D&D 3.5. We feel we’ve explored everything we can with the system. The new systems I’ve looked at are D&D 4E and Hackmaster. Hackmaster has a lot more appeal within my group so we discussed a few of the benefits of that system.

Our next game was Samurai, an old card game where each player is a samurai in feudal Japan. You attempt to gain honor by faithfully serving a respectable daimyo. The daimyos fight each other and there’s a lot of espionage and backroom deals to gain more power as well. I won that one, but just barely.

Another of our buddies showed up at that point. We switched to playing a new card game I’d gotten for Christmas, Villainy. Villainy is all about completing your villainous schemes as a super-villain like Lex Luthor. You have to gather a team of loyal henchman, commit nefarious crimes, complete your master plan, and finally defeat Fantastiman, Defender of Good and Justice. I played the nefarious Frog Tamer and attempted to decaffeinate the world’s coffee supply. Unfortunately, Master Asaurus Pain completed his vile scheme to release Fantastiman’s browser history before me, thus winning the game.

We went out for dinner at a Filipino place that served exclusively dishes with meat and eggs. We watched the final quarter of a football game between the Ravens and some other team. After that I had to head out. I dropped my friend off back at his house. On the drive home I listened to part of a Hardcore History on World War 1 that described what the USA was doing prior to entering the war.

And that’s the word on Fake Chinese New Year’s! I have yet to talk about Christmas stuff yet, but I’ll be getting there soon.

Every year my D&D group has a tradition of gathering together for New Year’s Eve and playing games all night long until we fall asleep when the sun comes up on the New Year.

As we got older it became a little inconvenient to hold this event on New Year’s Eve itself as many of us had other parties that we wanted to go to on the coveted night of December 31st.

So we changed when we held our party to whatever was most convenient for us! This year it was on December 27th to 28th. We were unfortunately forced to choose between one of our friends from San Diego and one from San Jose in who could attend as they had opposite schedules of availability. We ended up choosing the San Diego friend as we see him less often with an additional gathering at the San Jose friend’s house on January 3rd.

After greeting each other with hugs we started the night off with a game of Pirateer where we collect treasure and booty. We moved on to a game of Brittania that lasted… 6 hours. Quite long for a game that is supposed to last 2 hours. Brittania is a Risk-like game that simulates all the invasions of Britain from the Romans to the Normans. It’s a lot of fun, but sometimes it takes FOREVER.

After that we got some pasta for dinner (at 11:30PM) and played a few fast games of Tsuro. This was a new one for me. It’s kind of like the old video game Snake where you don’t want you guy to go off the edge. You have tiles that you lay down in front of your token as you move around a 6-6 map. The tiles decide where you go and also where any of the other players go once they touch that tile. You try to get your opponents to crash off the edge of the map while keeping room for you to continue playing tiles until the board is full.

Next up was a drinking version of Liar’s Dice. That’s the game they play in the second Pirates of the Caribbean movie where they bet on how many dice are underneath each person’s cup. In the movie they only play one round, but in our version we play several rounds. If you lose one round, you take a die out from your cup and roll with one less die. You lose the game if you lose all your dice. You can probably guess how we added in a drinking game aspect to Liar’s Dice. Whenever you lose a round, take a drink. When you lose all your dice, finish your drink.

If a Spy goes on a mission they can choose to sabotage it or not. Everyone votes on proposed teams for each mission and the Resistance attempts to figure out who the Spies are by seeing which missions failed and who was on the missions that failed. Meanwhile, the Spies sow strife and discord amongst the Resistance by spreading misinformation and lies. I’m quite good at that so my Spy partner and I won.

At some point we played a little bit of Hearthstone and unlocked the Fireside Gathering card back. It’s awesome and I love it, even though I lost all three matches I played to get it.

We went to sleep around 4:30. I woke up at 8:30 and everyone else was up again around 10. We ate some hot breakfast and moved on to the last game of Fake New Year’s, Zombies.

Zombies attempts to simulate most zombie movies. The hordes are coming and you and your friends either have to eliminate the zombie threat or make it to a helicopter and get out of town. We play with a lot of house rules that usually result in everyone dying to the zombie hordes. This time only I died early on in the game. Four other people would have made it to the helicopter, but my Spy partner from before tripped someone to stall the zombies. The tripped person valiantly fought off the horde against his will and bought time for the other three to escape.

We ended the game extravaganza and headed back home. A great night of fun for everyone (except the San Jose friend who couldn’t make it)!

The new Hearthstone expansion, Goblins Vs. Gnomes, comes out on Monday and I’m super excited!

If you’ve been keeping up with Hearthstone news then I’m sure you heard that the new expansion has two themes, mechs and randomness.

Blizzard has been releasing preview cards over the last few weeks such as these beauties: 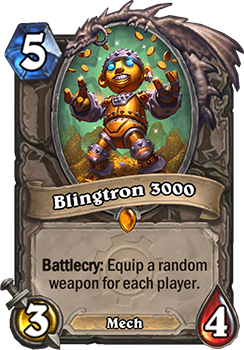 Blizzard is also giving everyone a free test run of the cards in Hearthstone’s Arena format. Everyone gets a free Arena run! The GVG cards are mixed in with the older cards, just like they did with Naxxramas.

I did my free run today and drafted a rush style mech warlock deck. The Mechwarper up there was a key part of the deck.

In one match I went up against a Priest. I coined out Mechwarper on my first turn along with another 1 mana cost mech that was reduced to 0 mana. The next turn I dropped a Harvest Golem for only 2 mana. Then I dropped this bad boy on turn 3:

And after Turn 4 my opponent surrendered. Mechs are crazy!

The GVG set is also introducing a few new cards for the pirate, demon, and beast tribes such as: 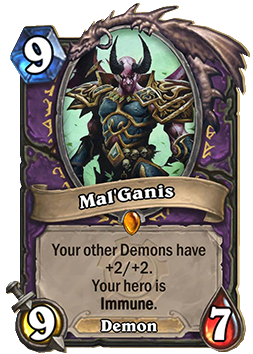 The new warlock legendary looks insane. I’m not sure it will be enough to make demon decks viable, but there were a few other demon cards that might make it work. You can check the cards out for yourself at Hearthstone Gamepedia

Before you get all excited to play on Monday I should remind/warn you. Blizzard has a tendency to announce that an expansion will come out on a specific date and then release it at 11:59PM Pacific time on that day and still claim they released it on time. This is technically true but it still leaves a sour taste in my mouth.

Anyways! Lots of new cards to try out! Fun to be had! Even a new game board to mess with which includes an aimable lazer gun that you can shoot your opponent with, a rocket, bombs, and a transmogrifier! Sweet!

My friends and I have been playing this online game called Warlight a lot lately.

Warlight is a lot like Risk, but it allows for almost every custom rule that Risk has ever had and more. The basic rules of the game are the same as Risk though, so if you’ve played Risk you will understand how Warlight works.

Warlight is played through your web browser at this site, on a tablet or smart phone with an app, or through Google Hangouts with an app.

You can play Warlight with your friends, with other random users on the internet, or with computer opponents.

The coolest thing about Warlight is all the different maps on the site. The traditional Risk Earth map exists among many others. There are larger maps of Earth, smaller ones of specific countries and regions, maps of established fantasy worlds (Westeros is a favorite of mine), and tons of other fantasy maps.

Warlight has so many awesome maps because it allows anyone to submit a map to play on the website. There’s tutorials on how to do it along with a free software program to design the maps in.

My friends and I latched onto the idea and I created a Warlight map version of one of our D&D campaign worlds. We’ve enjoyed playtesting it a lot and will release it soon. The map is called Gurutama. If any of you readers end up trying Warlight, maybe you’ll end up playing on my map once its released!