1091BCE: Hephaestus presented Karnafaust with a gift, the Fierce Axe of Dwavish Lords. With the Axe came a promise, that the dwarves were Hephaestus’s favorite people, even beyond death. King Karnafaust adopted the Axe as a symbol of his right to rule.

1045BCE: With Karnafaust’s death the Fierce Axe of Dwarvish Lords passed to Cogard. The Dwarven Regency Council held the Axe to Cogard came of age, just as they held his governmental powers.

996BCE: King Cogard turned 50 and came of age. He was coronated, but the Dwarven Regency Council did not relinquish governmental control to their designated sovereign. Cogard received the Fierce Axe of Dwarvish Lords at his coronation.

END_OF_DOCUMENT_TOKEN_TO_BE_REPLACED

Karnafaust held the Fierce Axe until his death in 1046BCE. The Axe passed to his swaddling nephew, Cogard. As the boy had just been born, the Axe was entrusted to the Dwarven Council. The Axe was wielded by the head of the council, not as a weapon, but as a symbol of the infant king’s authority. When Cogard was coronated he took the Fierce Axe as his birthright. The Axe’s presence provided a boost to Cogard’s popularity as he toured the Dwarven lands before returning to peacefully oust the Dwarven Council from power.

King Cogard used the Axe during the Dragon War, slaying many of the lesser dragons with it. Cogard also had a tendency to execute traitors of the other Conclave races using the Fierce Axe. Treasonous dwarves were killed by Cogard’s executioner instead.

The Fierce Axe was lost during the Dwarven Civil War. The dwarves claim that the Axe abandoned the people as it could only be used by a united dwarven race. Others say it was simply hidden by a group who didn’t want it used as a bargaining piece in the conflict between Cogard’s sons.

It was many centuries before the Fierce Axe of Dwarvish Lords resurfaced. Atreides was a dwarf aiding Princess Tarigananata’s claim to the throne in the First Alliance War. He had a vision that led him to the Fierce Axe’s hiding place. He slew a giant guarding the weapon and claimed it for the dwarven race. Before returning the Axe to his king, Atreides took it into battle with the Xorian Rage, Grave. Amalgami took the Axe and gave it to the Xorians when he negotiated his personal surrender. The Axe would linger in the Xorian Museum of Power for two more decades.

When the dragovinians rose to power, Jevaninada II had to renew alliances with the vassals within the Xorian Empire. He used the Fierce Axe to bribe the new Amazon Queen Ashabodai. She wielded the Axe for the initial push into Eastern Cimmeria.

The Hill Dwarves came to the assistance of the Alliance at the Battle of Phoenix. When the dragovinians assaulted the city, Torin came face to face with Ashabodai. Athena possessed Torin and with the help of his goddess and his friends, they defeated Ashabodai and reclaimed the Fierce Axe for the dwarvish people.

Torin gave the Fierce Axe of Dwarvish Lords to King Dainlin of the Hill Dwarves. Dainlin used the Fierce Axe to call for a meeting of the four Dwarven Kings. The meeting would decide which of the four would take his place as High King over all the Dwarves. Dainlin supported Torngar on the condition that Torngar join the Second Alliance. Sandil supported Torngar as well. Deekgaon refused to provide his support until Torngar named him general of all dwarven armies.

With decision finalized, Torngar became High King of the Dwarves. He wields the Fierce Axe of Dwarvish Lords and rules over a united Dwarvish nation once again. 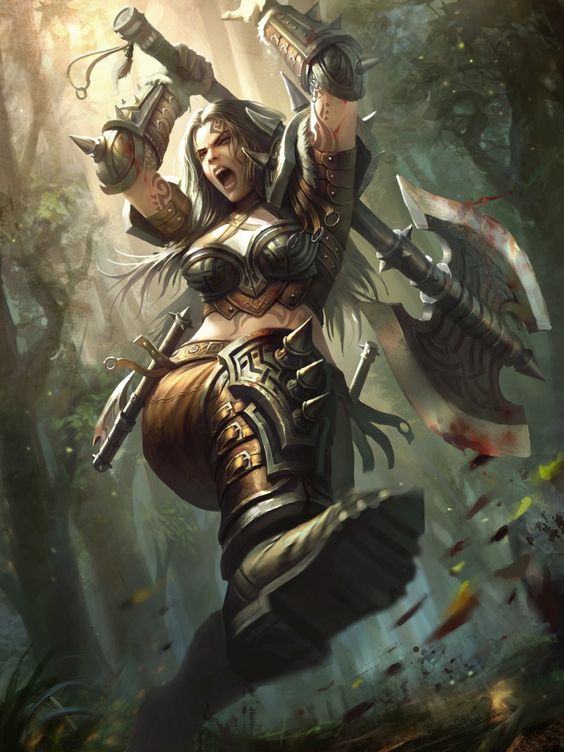 Jittehalong is the current Queen of the Amazons and vassal of King Jevaninada II. Queen Jittehalong is a warrior of great power and strength, worthy of recognition by the gift of dragovinian immortality, but she has rejected this offer time and time again. Many Xorians worry that this is a sign that Jittehalong harbors feelings of resentment towards King Jevaninada. In spite of these concerns, Jittehalong remains loyal to her liege.

Ashabodai was Queen of the Amazons and a powerful dragovinian in the Xorian Empire. After the previous Queen Anajakaze died, Ashabodai ascended the throne by besting her competitors through skill of arms as is tradition. She played the subordinate matriarch to King Jevaninada II during her reign, rarely challenging out or contradicting him. During the Second Alliance War she led her Amazon warriors against the soldiers of the Alliance. Ashabodai perished during the Battle of Phoenix at the hands of Logan the Warlock. She was succeeded by Queen Jittehalong, who is not a dragovinian but still serves the Xorian King.